Day 7: The Pinellas Trail by bike 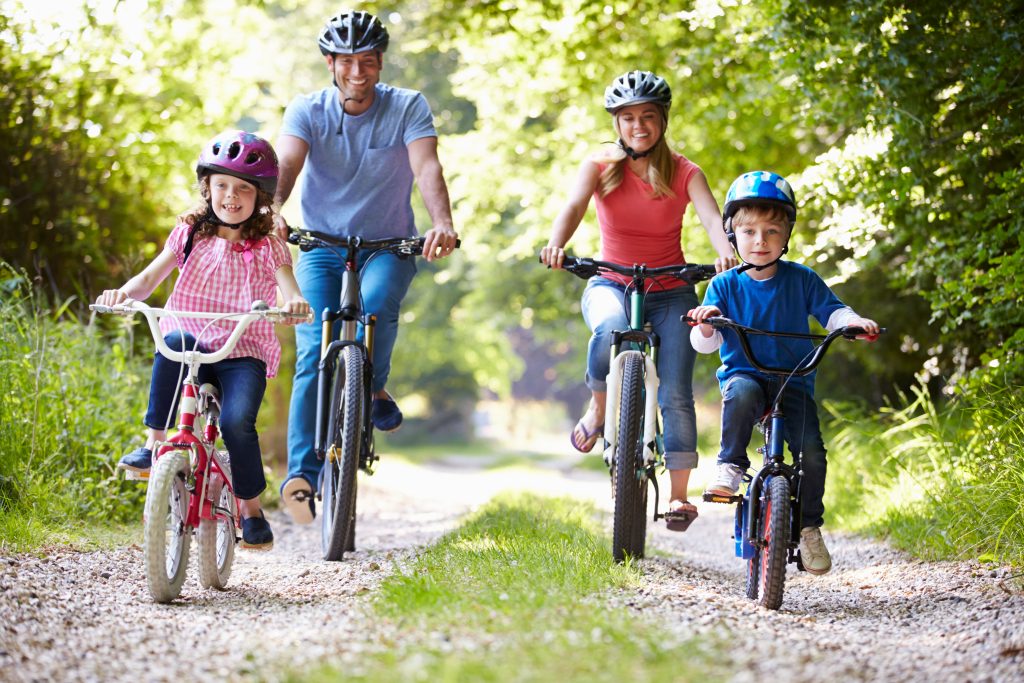 Pack your bags with some water bottles / beverages of choice, as you’ll might work up a little sweat today and will need to cool down.

Tuck into some yummy breakfast over at Clear Sky Draught Haus (or just Haus for short). They have a huge selection for the whole family. Go for their scrumptious square meal – which is anything but square (two eggs, two pancakes/French toast, one sausage, one bacon, haus potatoes/grits and toast) – choose between a long list of bennies and Mexican breakfast fare, or opt for some crepe-action.

After a full belly, head over to Kafe Racer, where you will rent bikes for the day and ride the Pinellas Trail.

After renting your bikes, you will head north on the Pinellas Trail to the picturesque Hammock Park, which is located just off the trail. There are several types of well-maintained biking and walking trails to explore in Hammock Park. They are all well-mapped, clearly making out restrooms and picnic tables, along with playgrounds for kids and space for doggos to run.

At the entrance you will first be met by a historic church which is worth to explore. On the trails you can expect to see Tortoise nests, egrets, rabbits and squirrels, but the main attraction in Hammock Park is the pretty Butterfly Garden.

After exploring Hammock Park, you will be hungry for some waterside eats. Get back on the trail and continue north to Ozona Blue Restaurant.

Ozona Blue is an awesome lunch spot with a big selection ranging from sandwiches, to pastas, flat breads, soups, fresh seafood and cuts from the grill. Plus, there’s some great veggie options, too. For dessert, treat yourself to some heavenly lava cake (just don’t overdo it, you still need to get back on your bike afterwards..!)

After lunch, hop back on your bike and head north again another 1.7 miles to de Bine Brewery. This will take your total trip to a total of 6 miles one way, if the kiddos are already tired, you may want to turn back after this stop.

The laid back de Bine offers an industrial style microbrewery and tasting room in the heart of Palm Harbor – and just off the Pinellas Trail – with lots to do for big kids as well as small. They conveniently enough have an arcade and Nintendo 64 setup, which will keep the little ones busy whilst you are busy perusing the great selection of craft beers, cider and wine on offer.

Afterwards, head back to Kafe Racer to return your bike.

Once you’ve returned your bike, stroll over to Lucky Lobster. Here you can expect the best of New England style dining – think freshly baked clams, succulent oysters, meaty crab cakes and their famous lobster roll.  But there’s also a great selection of non-seafood as well, such as wings, meat and pizza. Top it all off with some fluffy, homemade coconut cream pie. 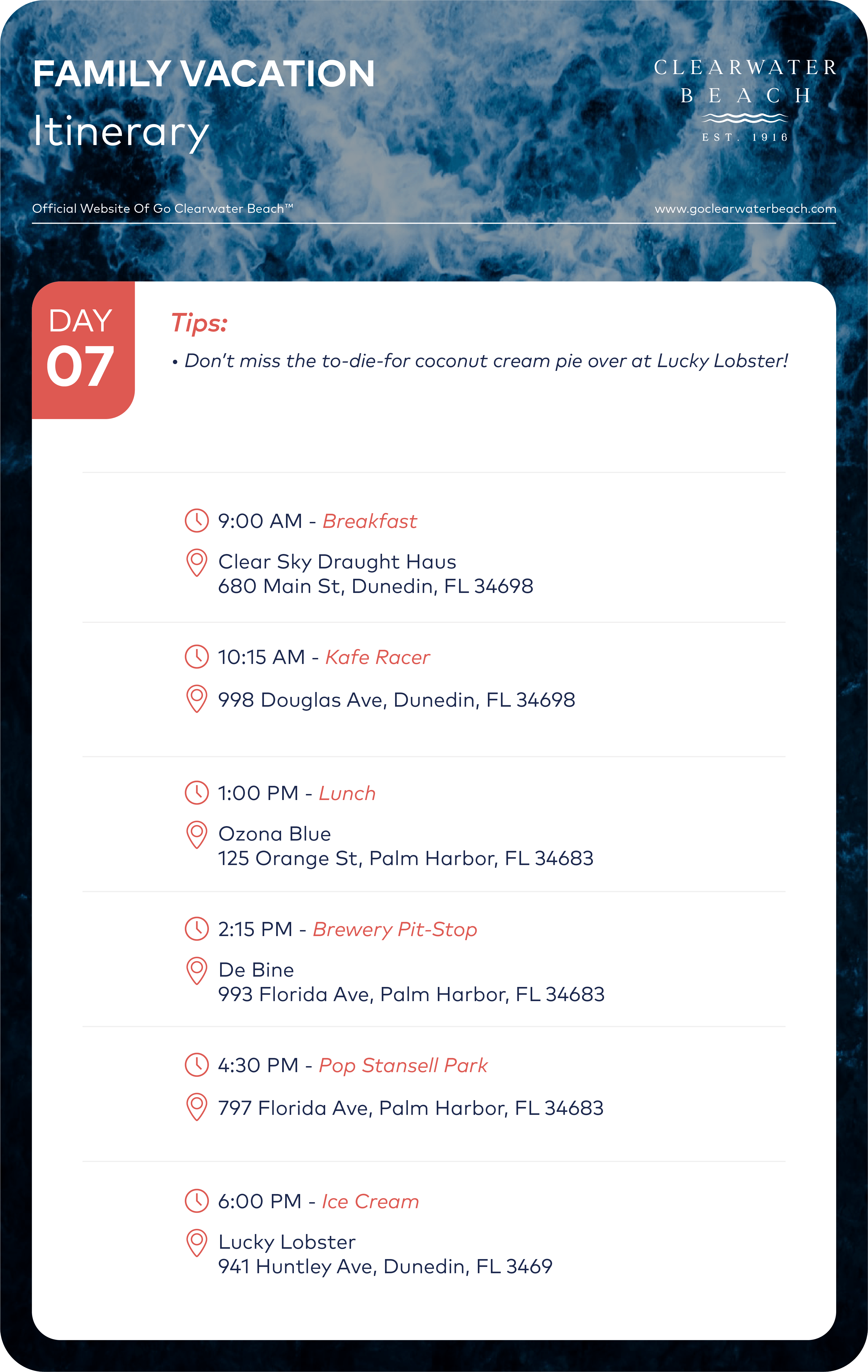 madisonavenue
Relax a little Wonderful way to relax and enjoy the sun, surf and sand. The air is clean and fresh and people seem nice!

The Bis
Clearwater memories Super nice beach, I personally like to stay by Pier 60. Totally worth spending the day at the beach. Parking right at pier 60 by hour, or valet park at the hotels off Cornado (Hyatt, Springhill, and Residence Inn for less than $20 for day) You literally walk across to beach and Pier 60 area is right there. Many shops off the beach area that are worth browsing as well as local bars and restaurants Easy to get to , straight shot from Tampa airport, over the bridge and your there!

Nat C
Worth the parking wait What a gorgeous beach. Powder white sand. Plenty of space. Nice waves. Parking is a challenge. Parking is sporadic and hard to find.

Prizzis
Endless beach An immense, wide beach where you can walk for hours or even days. It is lined with the dense row of big hotels, though.

Teresa K
Clearwater Beach Beach was very nice. If you don’t have your own chairs you can rent some. There’s a lot of seagulls around . Be careful if you want to eat chips or anything they will surround you. Besides that you will be satisfied with the area.

Michael R
Very nice place First time here and i must say this is a very nice beach, i have no complaints and anyone planning to come to clearwater should definitely do so. I highly recommend ????

circlemfarms
Nice!! Simple review.. Crowded so show up early to park and get a spot.. But very worth at least a day or two of any vacation! Clean.. have to give Clearwater credit.. it was super clean!!

Sandrinna8
Clearwater beach review The sand is super soft it does not stick to the skin the water is very clear and cold the beach is very clean and organized.

Set your Insta ablaze with pink sherbet sunsets kissing the horizon as dolphins frolic along the shoreline and the salt-speckled breeze rolls in. Tag us using #goclearwaterbeach to share your own FOMO-inducing Clearwater Beach moments!

Use our Trip Planner to get your utlimate trip itinerary.