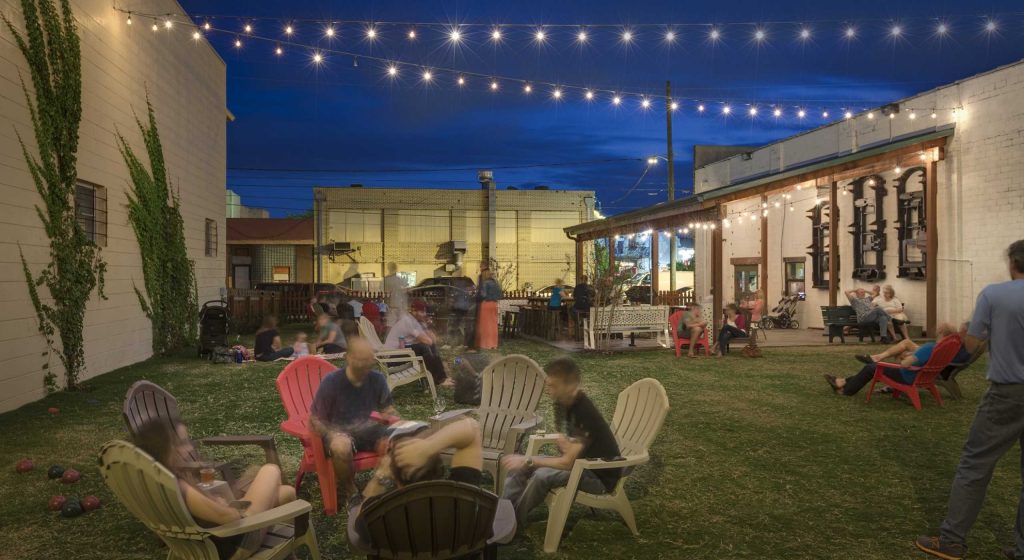 From Gulf Coast to Gulp Coast: Local Breweries in and around the Clearwater area

Award-winning beaches and excellent farm-to-table eateries aside, there is something else that we are really good at, namely making beer. Our craft beer scene is literally hop(s)ing, counting more than 40 fantastic local breweries/brewpubs just in and around the Clearwater/St. Pete area alone. It’s even got a name: the Gulp Coast, running 30 miles from Tarpon Springs in the north to St. Pete in the south, and has been unofficially dubbed the Sunshine State’s version of California’s wine country. Around half of these are connected by the Pinellas Trail, should you feel up for biking. (The trail itself is flat and easy making for a super smooth ride.)

Better yet, embark on a good old pub crawl by foot. Plenty of the brewpubs are conveniently concentrated in clusters within walking distance from each other, especially in Dunedin and St. Pete. (Dunedin only has about 37, 000 inhabitants but boasts with 7 craft breweries just a few blocks from each other.)

Far from your average watering holes, each of our cool artisan breweries offers a unique experience with expertly crafted menus for discerning hops aficionados and beer lovers in general. While it would be highly ambitious attempting to cram them all in during your one-week Clearwater Beach stay – and not something we would recommend – we have picked some of our favorites to help you navigate through the hoptastic jungle from north to south.

Guys, this is arguably THE most famous brewery in Florida, which has been putting out award-winning handcrafted beer since 2009. Tapping into our sun and local citrus industry, their most popular brew is the famous Jai Alai IPA. What’s more: You can sample their delectable ales and lagers at various outlets, including Tampa Airport and their newest addition located in Thunder Alley, directly under the Pam Iorio, boasting a full bar and tasty Floridian cuisine. 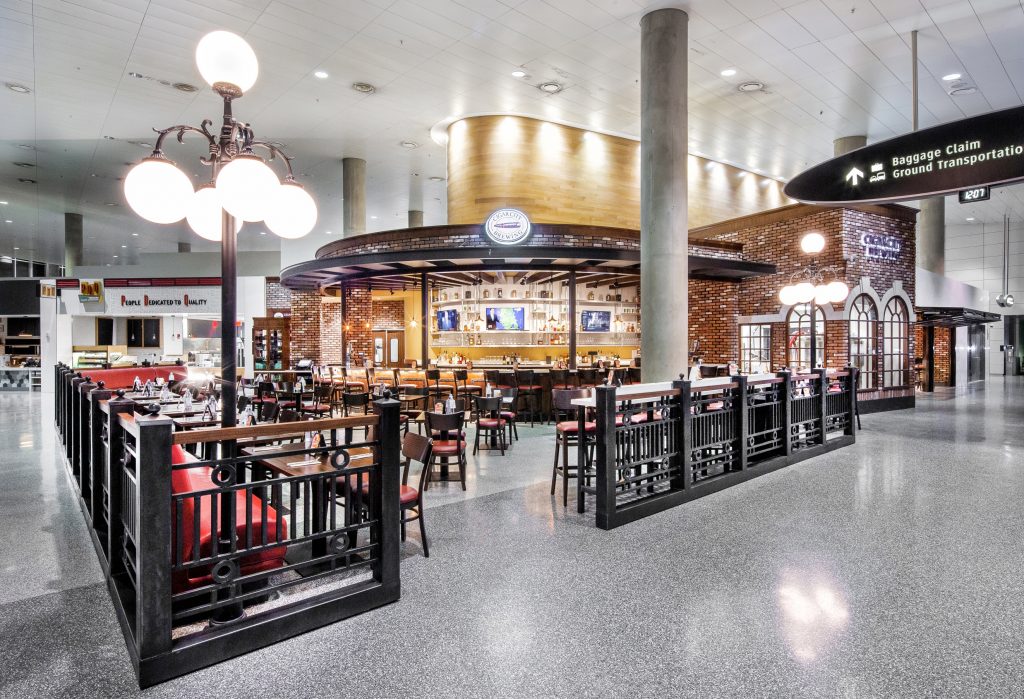 The guys, in their own words, ‘aim to bridge the gap between craft beer connoisseurs, enthusiasts and novices.’ They are doing that by serving up consistently award-winning brews using locally sourced ingredients at no less than three locations. And they’ve also added the Big Storm Coffee Co. and Creamery to their repertoire. We especially love their retro branding. 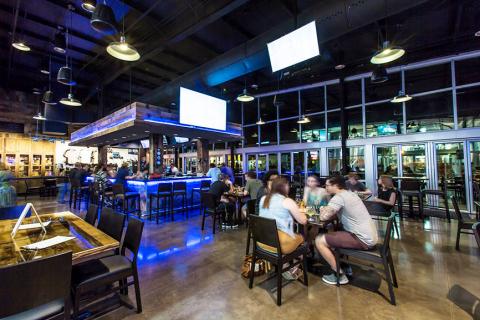 This is a brand-new brewery vying for beer domination with a spacious beer garden, and we predict that it will become one of the best. You heard it here first.

Right on the corner of the Warehouse Arts District/Grand Central District, you’ll find 3 Daughters Brewing, one of the largest independent breweries in all of Sunshine State, crafting Florida-inspired beer – with an innovative twist. The contemporary tasting room is spacious and inviting, and the name derives from the question “how many beers does it take to put three daughters through college? Expect live music and food trucks on the weekends. 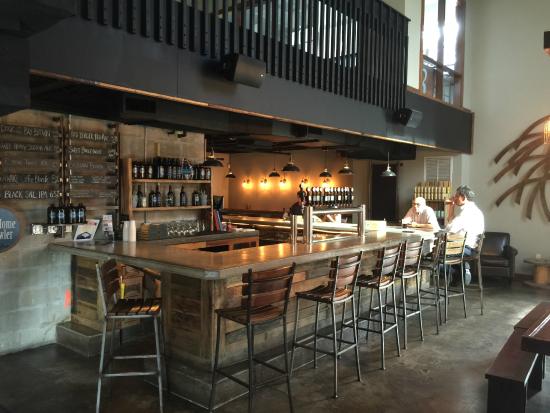 There is some history behind the Green Bench Brewery name. It derives from the 1900’s when you could find some 2,500 green benches dotted around downtown St. Pete (affording the city the nickname ‘the Green Bench City’). This top-rated brewery serves up awesome stouts and wheats, pale ales and IPA’s – including their buzzworthy sour IPA, coupled with a fun outdoor area perfect for chillaxing. 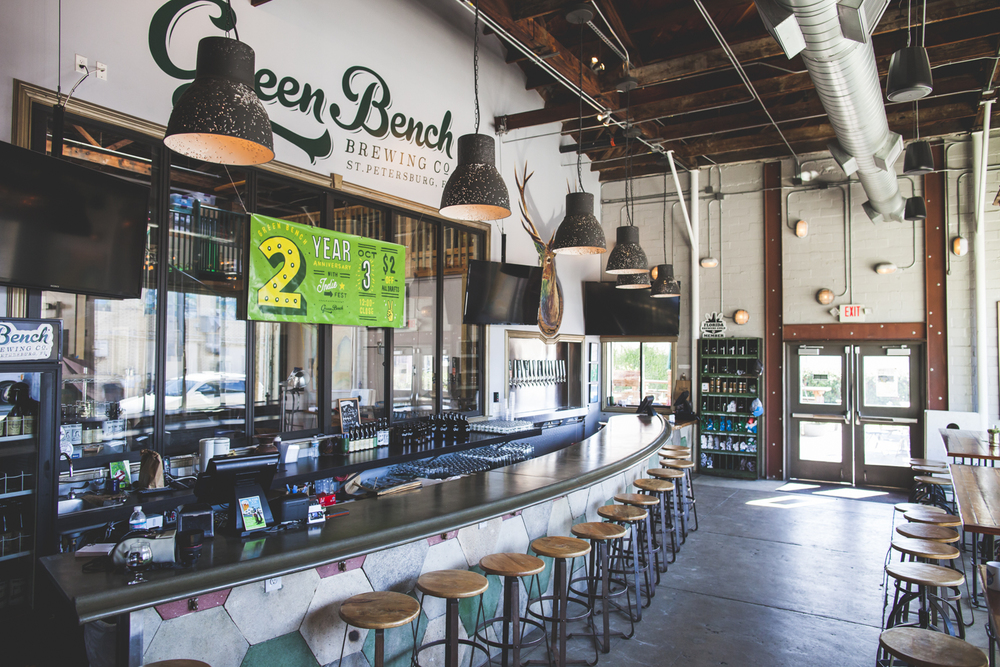 Located in downtown Dunedin, the hip Woodwright Brewing Company offers a warm and friendly atmosphere framed by beautiful, bespoke wooden touches. Adhering to a “no fluff, just straightforward beer” kind of maxim you can expect German and European styles here (free from “fruit, sawdust or glitter”) and enjoy the feel-good tunes of bluegrass every Thursday. 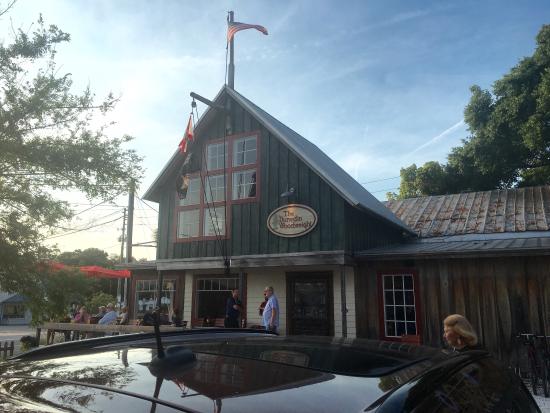 Dunedin House of Beer is famed for serving 40 great beers on taps, and are always looking for new and exciting brews to try. They have everything from IPAs to stouts, ambers, lagers, porters, ales and more in their arsenal from many top breweries across the nation, along with Hopped Passion Fruit Kombucha. Set in a friendly and relaxed atmosphere you can also find life-sized childhood games such as Jenga and Connect Four. 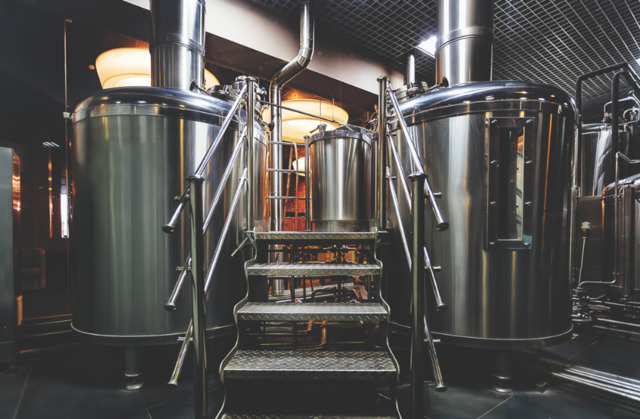 Our first ever craft brewery sits just steps from the sand, and offers a welcoming upbeat atmosphere accompanied by live music trivia and bingo nights (Introducing: The Original Bandingo). These guys offer a wide selection of local brews, but there’s also a mouthwatering cocktail list along with some great wines. 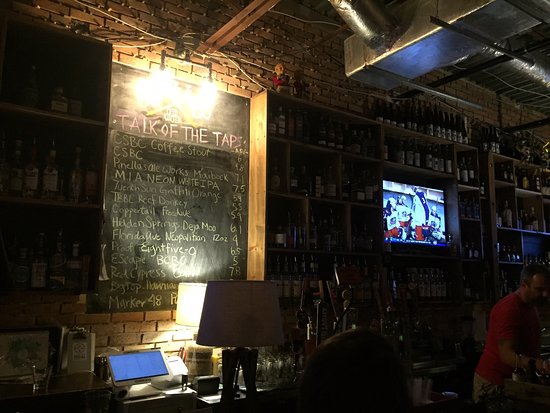 Industrial style microbrewery and tasting room in the heart of Palm Harbor with a laid back vibe, and features some of the best hand-crafted BBQ in the area! Oh, and they have an arcade and Nintendo 64 setup, perfect for small and big kids. 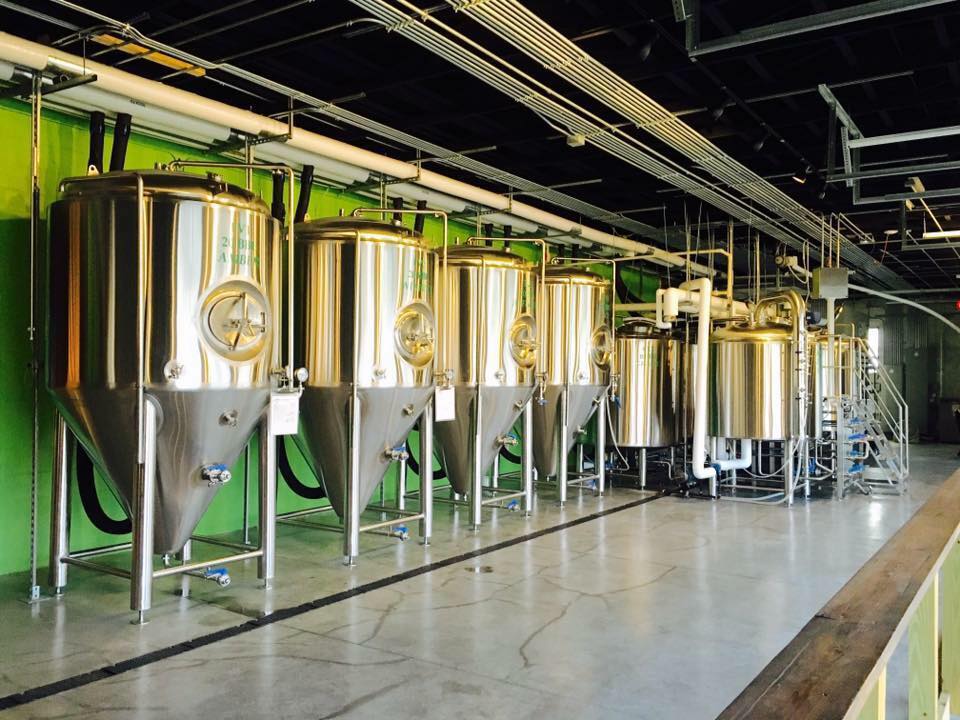 Hands-down the best variety of sour beers in the area. If you like sour beers this is a must-visit. If not, well they have some incredibly creative brews that you will enjoy, and are driven by the calling to solve beer’s mysteries and uncover new flavors. Cheers. 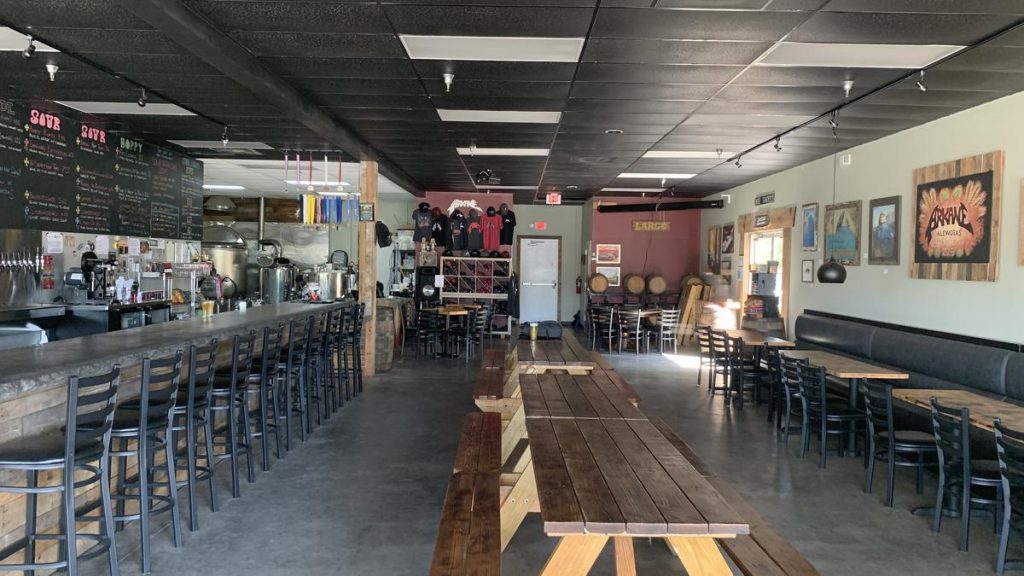 Hip brewery you can literally pedal straight up to, just off the Pinellas Trail, and seconds away from downtown. Expect 30 unique brews, along with wine and ciders making for a perfect thirst-quenching pit-stop. 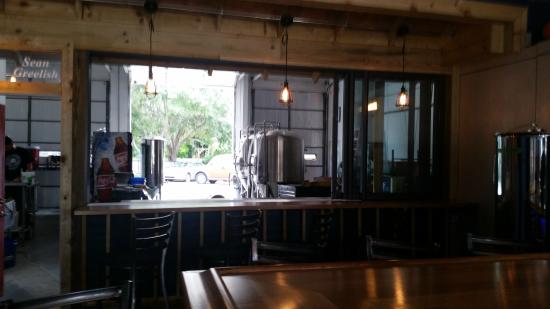 Situated just a hop and a skip from the Sponge Docks on East Lemon St. in a historical building, which served as jail/fire station back in the 1900s. These guys make craft beer created by outdoorsmen and fishermen in a relaxed atmosphere, complete with pool and darts. 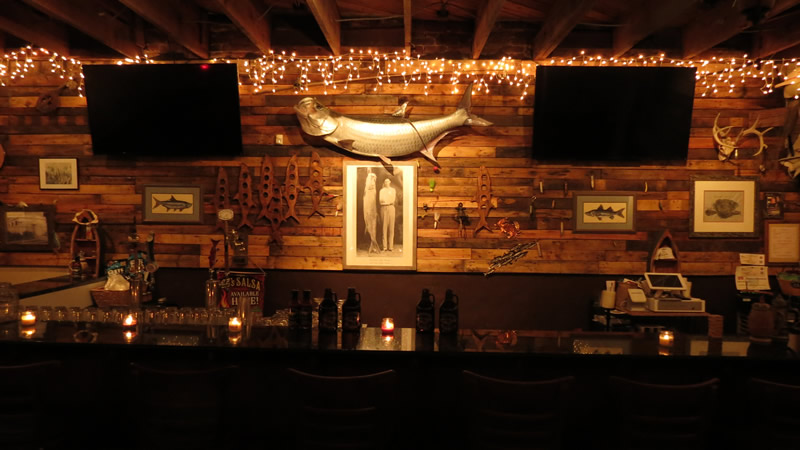 Cozy, intimate mom-and-pop nanobrewery famed for their raspberry wheat and smoked pulled pork tacos. There’s nothing pesky about this hidden away neighborhood gem, which is wedged between a barber and Monty’s Machine Shop. 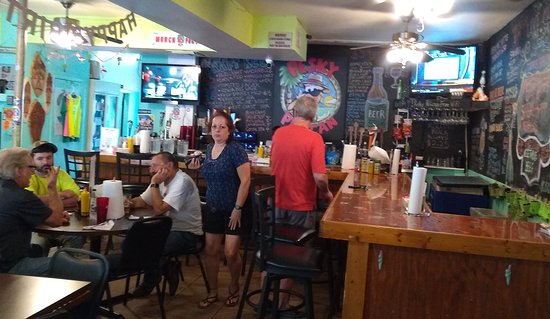 Right Around the Corner, St. Pete

You’ll feel like a kid again once stepping inside Right Around The Corner, which houses pinball machines, Nintendo and Pacman games in what is Florida’s first “arcade brewery”. We call it a stroke of genius. A place the whole family can enjoy – even doggo is allowed in. 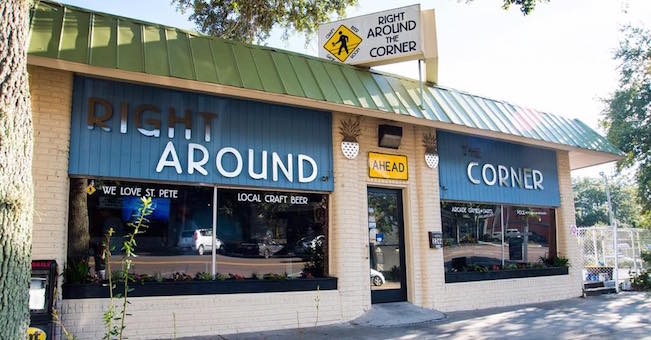 A cool, quirky addition to the trail run by three long-time local bartenders, applying their

mixology skills on some forward-thinking brews. Or how about toasted coconut porter? And you won’t forget (nor fall off) the barstools which are made out of kegs and license plates. 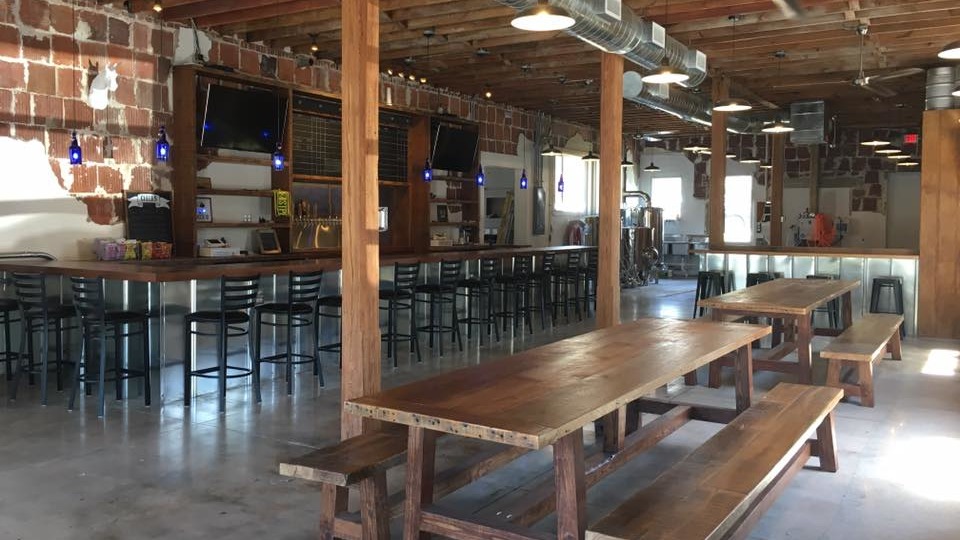 *If visitors are going to St. Pete we can create a walking map to hit a lot of breweries for the ultimate experience then. This would be ideal for the true craft beer aficionado.

madisonavenue
Relax a little Wonderful way to relax and enjoy the sun, surf and sand. The air is clean and fresh and people seem nice!

The Bis
Clearwater memories Super nice beach, I personally like to stay by Pier 60. Totally worth spending the day at the beach. Parking right at pier 60 by hour, or valet park at the hotels off Cornado (Hyatt, Springhill, and Residence Inn for less than $20 for day) You literally walk across to beach and Pier 60 area is right there. Many shops off the beach area that are worth browsing as well as local bars and restaurants Easy to get to , straight shot from Tampa airport, over the bridge and your there!

Nat C
Worth the parking wait What a gorgeous beach. Powder white sand. Plenty of space. Nice waves. Parking is a challenge. Parking is sporadic and hard to find.

Prizzis
Endless beach An immense, wide beach where you can walk for hours or even days. It is lined with the dense row of big hotels, though.

Teresa K
Clearwater Beach Beach was very nice. If you don’t have your own chairs you can rent some. There’s a lot of seagulls around . Be careful if you want to eat chips or anything they will surround you. Besides that you will be satisfied with the area.

Michael R
Very nice place First time here and i must say this is a very nice beach, i have no complaints and anyone planning to come to clearwater should definitely do so. I highly recommend ????

circlemfarms
Nice!! Simple review.. Crowded so show up early to park and get a spot.. But very worth at least a day or two of any vacation! Clean.. have to give Clearwater credit.. it was super clean!!

Sandrinna8
Clearwater beach review The sand is super soft it does not stick to the skin the water is very clear and cold the beach is very clean and organized.

Set your Insta ablaze with pink sherbet sunsets kissing the horizon as dolphins frolic along the shoreline and the salt-speckled breeze rolls in. Tag us using #goclearwaterbeach to share your own FOMO-inducing Clearwater Beach moments!

Use our Trip Planner to get your utlimate trip itinerary.